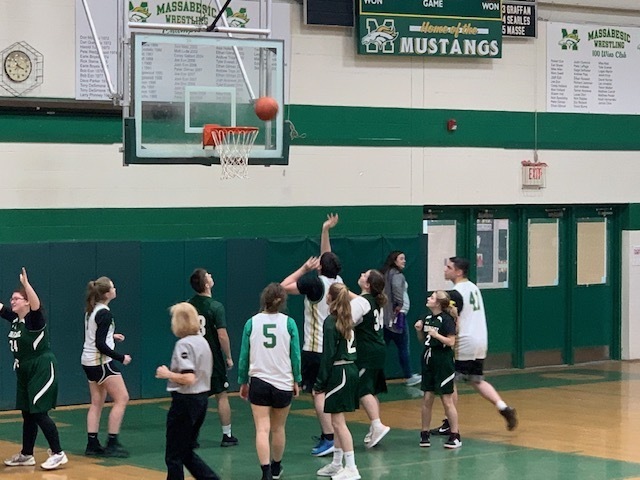 Yesterday the Unified played their last home game vs Bonny Eagle.  This was also senior night as the senior players and their partners were recognized for all of their hard work.

The game started with a bang as the players came running out through the tunnel formed by the cheerleaders through a banner held by their fellow students.  It was a great atmosphere a game.

David Smith did another great job of singing the national anthem!

The game went back and forth as the teams traded baskets.  The partners did another great job as they would not only support their own teammates but BE's as well.  There were numerous times where one of the partners got a rebound and would give to their teammate another chance to score.

For those of you that have not had the pleasure of seeing a Unified game you are missing quite a treat.  Coaches Fournier, Landry and Soldati have done a tremendous job of working with these athletes.  This is not an easy task to get the players familiar and comfortable with each other.

The coaches would make substitutions every 4-5 minutes.  That was the easy part.  The hard part was to make the right substitutions where the players were always in a successful situation.

The fans for both teams were very supportive of not only their team but those of the opponent.  According to the Maine Principals Association this is one of the fastest growing sport in the state with some of the biggest support.