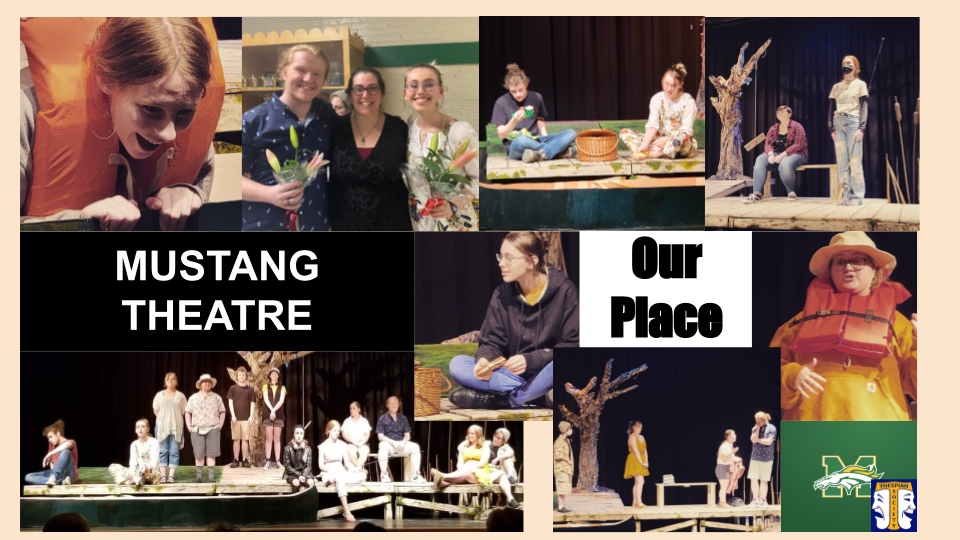 Mustang Theatre performed a one-act play, "Our Place" on March 18 & 20 in the MHS auditorium, and will perform again on March 25 & 26 in the Regional One-Act Festival at Kennebunk High School. We wish them good luck in this annual competition!

Review of Our Place, By Terry Gabbard

These kids have honed their characters and scenes into such intense, relatable people and situations that it’s almost uncomfortable to relive some of those very experiences most of us have had at one point or another in our lives.

The content of the play can touch on a 55 year old’s heart strings, whose parents or grandparents are in the early or late stages of Alzheimers (I watched my grandmother go through it and it was hell.) Or it can reach the kid who never quite feels like they fit in. It replayed a scene for myself that I recall from college, when I felt myself drifting away from a guy I dated that I thought I could never have, but who turned out to be the wrong fit for me anyway. It’s the parents determined to create a memorable moment as a family, enjoying the outdoors. It’s that clingy younger sibling, sticking like glue to the ‘difficult’ older sibling who loves them down deep but is too tortured in their own mind to realize it.  It’s simple, yet oh, so heavy, and real.

How such young people can depict and emote such targeted emotion is impressive; clearly they’ve put in the work and they want you to feel it. So be prepared to feel, whether you want to or not, because these kids have it dialed in tight.